Together, CPCRS and Tuskegee University are focusing efforts on practical, yet imaginative futures for a small, rural school in Macon County, Alabama.

The University of Pennsylvania and Tuskegee University are both committed to the development of a sustainable long-term preservation plan for the St Paul Missionary Baptist Church, The Armstrong School, and its cultural landscape. This effort is part of a larger, longer-term partnership between the two schools.

Already, the Tuskegee-Penn partnership has secured a small grant for emergency stabilization of the Armstrong School from the J.M. Kaplan Fund and is seeking a similar grant from the National Trust for Historic Preservation. In the Spring 2021, semester Tuskegee architecture students and Penn historic preservation students worked to document and record the conditions of The Armstrong School in preparation for future preservation planning. Students produced measured drawings of the school building and a list of recommendations for future interventions.  This project is also part of an effort to strengthen the relationship between Tuskegee University’s Robert R. Taylor School and rural communities in Macon County. Re-establishing these ties should ultimately lead to stronger stewardship plans and larger national audience. Our next step in the process is to successfully list the landscape on the National Register of Historic Places.

Although the church was a boon to the community, the rapid defunding and decentralization of public schools in rural black communities decreased the possibility of upward mobility and societal progress. In response to these circumstances, Booker T. Washington formulated an outreach plan called the Rural School Program that centered on the construction of schoolhouses to mitigate the adverse effects of Macon County’s fiscally and racially troubled educational system on black children. [1] According to Ellen Weiss, in 1904 Washington brought the Standard Oil executive Henry Huddelston Rogers and the Philadelphia heiress Anna T. Jeanes into the endeavor. In 1907 the Jeanes estate launched a million-dollar program for industrial education using traveling supervisory teachers, a program that would expand across the South. [2] Between 1905 and 1911 Rogers contributed to funding over 40 small "model" schools for eight or nine-month sessions in Macon County. This program involved a number of highly regarded Tuskegee faculty, including Clinton J. Calloway, first director of the extension program as the supervisor, and Robert R. Taylor, the first professionally educated black architect in the United States, William A. Hazel as the architects, and George Washington Carver, the prominent agricultural scientist, who developed educational curriculum and landscaping plans for the rural schools. [3] The schoolhouses were described as “painted and [..] abundantly supplied with blackboards, and with a little flower garden in front.” [4] As stated by Mary Hoffschwelle, what happened in Macon County gave Washington and Calloway important precedents for the early Tuskegee Rosenwald Community School building program: "securing the patronage of a single philanthropist, using matching grants and combining them with money from other agencies, cooperating with community activists, and linking instructional improvements to new school buildings.” [5]

The wooden building located south of the church, now known as The Armstrong School, is the only known remaining schoolhouse from the initial Tuskegee Rural School Program, illustrating the early and on-going relationship between Tuskegee and rural Black communities in Macon County at the turn of the century. Similar to the Rosenwald Schools, Roger’s contribution only covered a portion of the total building costs. The majority of the funding to construct the school building came from the St. Paul Missionary Baptist Church congregation and the surrounding Armstrong community. As stated by Dr. Shari Williams in her book on education in South Macon County, “The intricate details of the story of black education in the rural south include the fact that prior to emancipation enslaved people established a tradition of self-determination in pursuing educational opportunity.”[6] The Armstrong School served as a one-room schoolhouse from 1906 to 1954. Following the Supreme Court’s 1954 Brown v. Board of Education ruling to integrate schools, children from the Armstrong community were transported and/or bussed three miles away to another South Macon County school, Cotton Valley School. Cotton Valley School was a semi-private, grade school established for African American children in the area by the American Missionary Association in 1884 at the behest of Booker T. Washington. The main school building was burned in 1961. Classes continued in the teachers' cottage and the vocational agriculture building for grades one through six until c. 1967 when the school was consolidated with the Macon County Training School in the nearby Roba community.

The wooden building located south of the church, now known as The Armstrong School, is the only known remaining schoolhouse from the initial Tuskegee Rural School Program, illustrating the early and on-going  of the relationship between Tuskegee and rural Black communities in Macon County at the turn of the century. 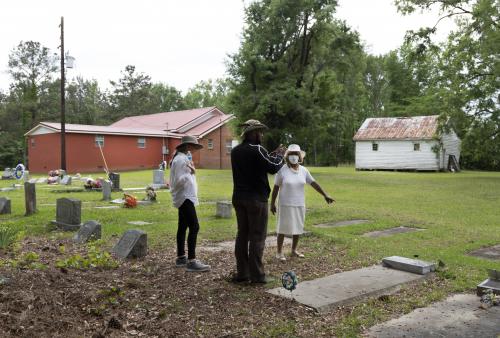 After 1954, the St. Paul congregation regularly used the school building as a Sunday School for religious education and a fellowship hall on holidays. By 1966, the school continued community education with the addition of senior citizens’ classes. A church member also recalls the school building being used as a recreation center for a local baseball team, the Armstrong Astros.

Despite being a place of community gathering, the legacy of the St. Paul Missionary Baptist Church and The Armstrong School also have significance related to the unethical medical history of the U.S. Public Health Service Syphilis Study, Macon County, Alabama. The church served as a “roundup” site for health officials to meet community members and transport them to Tuskegee or carry out examinations in the farming communities of Macon County.  Participants who were a part of the study’s control group are buried in the graveyard on site and their descendants are congregants of the Church.

[3] The Extension Department, The Negro Rural School and its Relationship to the Community. (Tuskegee, AL: Tuskegee Institute, 1915).

[5] As noted by Dr. Kwesi Daniels of Tuskegee University, the more accurate name of the rural schools erected through the Rosenwald Building Fund is the Tuskegee Rosenwald Community Schools. Tuskegee Institute developed the initial plans, the Rosenwald Fund provided 1/3 of the funding, and the rural communities, with the support of the state education boards, provided the other 2/3 of the funding. Including all of the partners in the naming of the schools assures the credit is equally shared. Mary S. Hoffschwelle, “The Rosenwald School Building Program,” in The Rosenwald Schools of the American South (Gainesville, FL: University Press of Florida, 2006).